My Why - Emily Ford, Instructional Coach 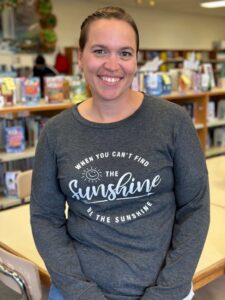 A challenging math class in 6th grade and a teacher who spent the time working with Emily Ford sent her on a path to become a teacher. As with many who go into education as a profession, it takes a favorite teacher and a transformative experience to change perspective. Emily’s 6th grade teacher, Mrs. White, took the extra time to work with Emily, gave her the tools and confidence to turn her math aptitude around, so much so that math became one of Emily’s favorite subjects. And with that, Emily knew she had to give back in the same way. She studied education at Illinois State University, participated in District 21’s PDS internship program as a student teacher, and then went on to earn her M.Ed. in English as a Second Language (ESL) from the American College of Education.

While she applied to several districts after graduation, her heart was set on working for District 21 because of the wonderful experiences she had while interning. She was hired in District 21 in 2008 after graduating, teaching for a year at Cooper and then has been at Frost ever since.  Coming to Frost opened Emily to the ESL world and it quickly developed into a passion. She has taught every level, from 1st to 5th grade at Frost in gen-ed, dual language, and self-contained ESL. She recently switched to serve as the instructional coach to assist the staff, the large bi-lungual community, and the rest of the students at the school. Though she doesn’t speak another language besides English, Emily makes connections with her students through visuals, gestures and physical activity to make them feel a part of the community. “They catch on fast,” said Emily.

In fact, she assisted a newcomer to the district who was very shy, didn’t speak English and was struggling with reading and writing. Emily first had to build trust with the student. “I picked up on small cues, little successes that showed growth, and recognized them which built her confidence,” said Emily. “I now see this student in the hallways and she is happy and smiley, speaking English well and growing as an individual,” said Emily. The impact she’s made and these transformational experiences are what keeps Emily at District 21.

In her spare time, she likes to spend time outside as much as she can with her children, ages 9, 7 and 4. She is also transforming her local park district by serving as the president of the board. “I see a deep connection between the community and the park district and I wanted to be an active participant by serving in this way,” said Emily.

It’s no surprise that Emily is transforming lives, both at Frost Elementary and the surrounding communities. It all started with a teacher who inspired her. Now, she inspires others and District 21 is lucky to have her.

My Why - Gladys Erdmannsdorfer, Family Liaison

My Why - Katie Gore, Kindergarten Teacher